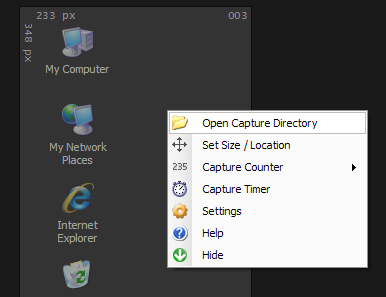 ScreenParts is a small and unusual tool for capturing fixed-size areas of your screen.

Standard capture tools will mainly focus on grabbing the full screen, or individual windows - but ScreenParts is different. Launch the program and by default it'll display a 300x300 pixel transparent capture form. You can adjust this to the size of capture you'd like: 640x480 pixels, say. Then you simply drag the window around the screen until it's over the area you'd like to capture, and press Ctrl+Alt+S to save that image to the clipboard.

If this doesn't quite work for you then the Settings dialog provides many possible tweaks. You can have the grab saved to a file, for instance. There are options to include the mouse pointer in an image, or play a sound when the capture takes place. And you're able to set up a capture timer to have an image grabbed after some defined delay.

If your captures are typically full windows then ScreenParts probably won't be for you: manually positioning the capture form will be too much hassle, and you should probably use a more conventional screen grab tool instead.

But if you need to grab fixed-size areas of an image then ScreenParts will be far more useful, as you'll be able to frame the capture right away, see exactly what you're getting, and so avoid the need for cropping later.

And while this might not be something you need to do often, the good news is that ScreenParts is small (235KB) and doesn't install anything on your PC, so there's no great penalty in keeping it around.

ScreenParts isn't suitable for full-screen or application window captures, but if you only need to grab a fixed-size area of your display then it just might be useful.