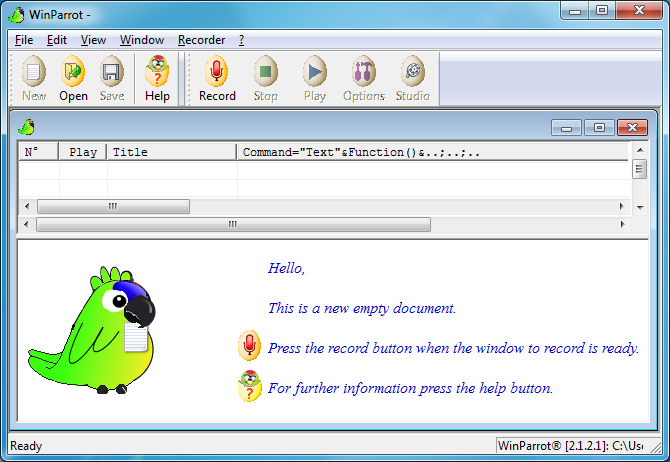 WinParrot is a tool which can record your mouse clicks and keypresses, and then replay them later, allowing you to automate many common PC tasks.

You might have the program open a browser, go to a website and carry out some specific action, for instance. You could run a screen grab tool to capture an image, then do something with the resulting file. Or you might use WinParrot to set up a software demo, such as entering figures into a spreadsheet, and producing a graph with the results.

Setting this up is surprisingly simple. The program's portable, so there's no installation: just launch it, click Record, and start carrying out whatever action you like. Press the End key when you're done, and the recording stops: easy.

As with all macro recorders, there can be complications, particularly with mouse clicks. If you're automating Windows Calculator, say, and the Calc window launches in a different position to when the macro was recorded (which will happen if you ever move it in the future), the clicks will be sent to the wrong position and your sequence will fail.

WinParrot does far more than most free macro recorders to help you resolve problems, though. It clearly displays your sequence of steps after recording, for instance. A Debug mode helps you better understand how your macro works. You can edit steps easily, advanced users can extend their macros with a supplementary programming language, and when you're done you can even schedule macros to be run whenever you like (see the online documentation for more).

An easy to use and surprisingly capable macro recorder.

Automate your web browsing with this versatile macro recorder