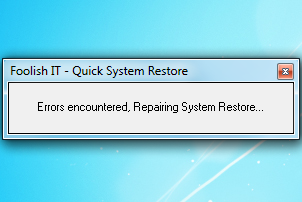 QuickSystemRestore is a command line tool with a single purpose: to create a System Restore point.

While that sounds simple enough, the program is actually a little smarter than it first appears. Because if the creation fails for some reason - System Restore has been turned off, say, or it's broken for some reason - then it'll try to repair your system to get everything working again.

And the repairs are surprisingly thorough. So QuickSystemRestore will look for policy settings which might be causing a problem, say, and restart the necessary services. It'll try to repair System Restore, as well as the WMI service, and if a Restore Point still can't be created, will prompt you to reboot your PC.

Please note, in order for this to work, you must run QuickSystemRestore as an administrator. And, annoyingly, if you forget the program won't point this out. Rather, it'll complain that System Restore isn't working, which is rather misleading.

If you set up and run the program correctly, though, this won't be an issue, and QuickSystemRestore will create restore points on command whenever you feel it's necessary.

The program needs to recognise when it doesn't have the necessary permissions to run properly, but otherwise QuickSystemRestore provides an easy way to create Restore Points on demand

Extend and get more from the Windows command line

Are your drivers up-to-date? Here's how to find out