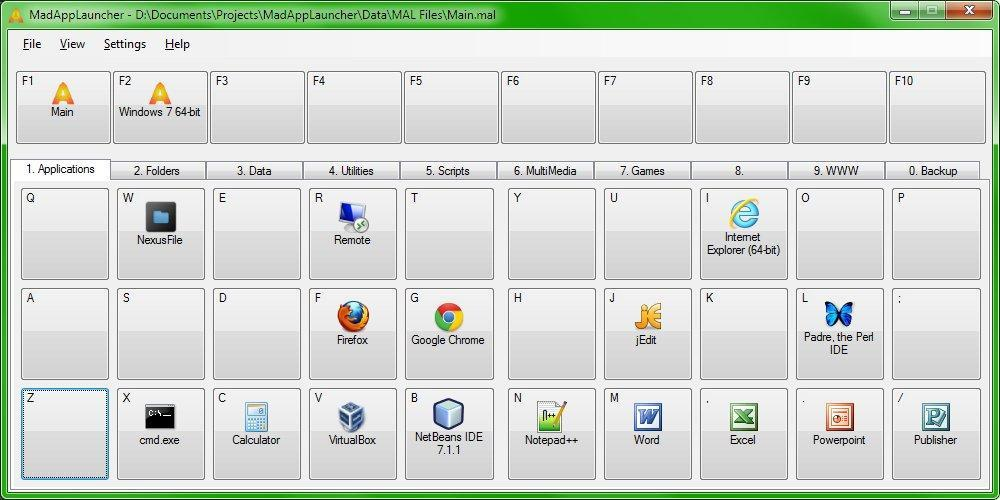 MadAppLauncher is a simple program launcher which makes it easier to access and run your applications.

Instead of the usual dock, MadAppLauncher uses a basic QWERTY keyboard layout. There are no complex hotkeys to remember: assign programs to individual keys, and then just pressing that key will launch the application.

You also get ten tabs, which correspond to the number keys, and each of these have their own QWERTY layout. This allows you to separate your programs into ten groups, each of which can have up to 30 applications. And if that's not enough, you can save those settings as one file ("Internet", "Work" etc) - and then start as many others as you need.

Every application "key" can be customised in much the same way as a regular Windows shortcut. You can set its name,icon, target, command line arguments, starting folder, window style (normal, hidden, minimised, maximised and so on).

Unusually, you even get some control over the window size and position, so for instance you might decide to launch a program in the bottom half of the screen (assuming the application supports that, anyway). This doesn't always look good - the application may appear somewhere else, then move - but it does work.

And there are all kinds of options here. You can move an application from one key to another; keep MadAppLauncher on top of other windows; show or hide the program when Windows starts, and more.

The documentation isn't great, and MadAppLauncher won't win any awards for its visual style, but the program is an interesting and effective way to organise large groups of applications

An extended version of the Windows Run box

A stylish dock for launching programs, web pages and more

Launch and browse a folder from an icon on your taskbar

Keep your desktop free from clutter with this file docking tool

An alternative launcher for OS X with a raft of extras