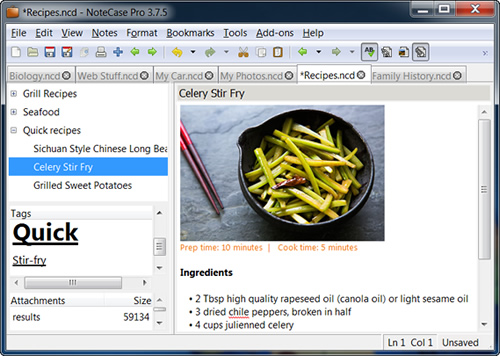 NoteCase Pro Lite is the free version of a commercial program for collecting, organising and managing your text notes.

Individual notes can have simple formatting (bold, italic, underline, colour, font/ font size, text alignment) and you're able to insert images. There are lots of restrictions when compared to the commercial builds - no spellcheck, autocomplete, bulleted lists, audio embedding/ recording/ playback etc - but if you're used to using Notepad then it'll still seem impressive.

Notes can be organised into lists or trees. A bookmarking scheme helps you locate anything important, and there's also a powerful "Find" option. Again, it's not as powerful as the commercial builds, but there's still more than enough functionality to be useful.

NoteCase Pro Lite's best feature is probably its ability to import data from more than 30 file formats, including Evernote, XMind, TreePad, Tomboy, FreeMind, MindManager and more - great if you need to migrate your data from some other application.

Documents may be exported for sharing with others, too. There's only support for a few formats here - TXT, RTF, OPML, HTML - but you do get some control over the results, so for example exported HTML files can display your notes in their original tree form.

The Lite build does have a lot of restrictions, some quite major (no image resizing, no printing). Annoyingly, the interface doesn't highlight unavailable features, which means you'll soon become very familiar with the "can't do that in this version" dialog. But if you like the program then you can upgrade to a commercial build for anything from $5 (Android, lifetime licence) to around $75 (all platforms, lifetime licence).

The Lite build has some major restrictions, but it's still usable enough, and if you need NoteCase Pro Lite's wide Import format support then the program is worth a try.

Keep reminders on your iDevice