Cut your browser's RAM use? 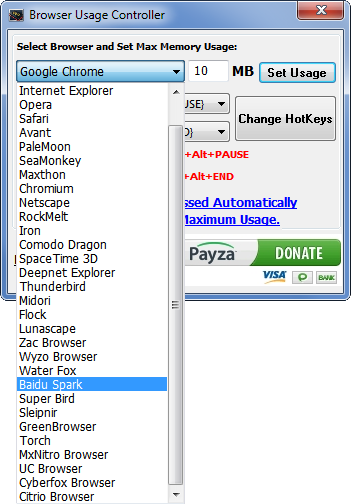 All Browsers Memory Zip is a memory optimizer specifically designed to cut your browser's RAM usage.

The program supports almost 40 browsers, and in theory at least requires no configuration at all. Install and run it and All Browsers Memory Zip monitors your browser's memory consumption, stepping in if this goes above a defined figure.

The developer says the program "compresses" your RAM, which presumably explains the "Zip" in its name. Sounds potentially risky, but don't worry, from what we can see it does nothing of the kind.

Instead it looks like All Browsers Memory Zip uses a Windows call which asks a process to cut its RAM usage. It's the standard technique used by just about every memory optimizer around.

Does this work? In a way. By default All Browsers Memory Zip allowed Chrome to consume up to 30MB RAM, for instance, and if our test PC went above that we could see its memory usage drop again.

The problem is that if Chrome actually needs that RAM - which it almost certainly does - then its memory usage will rise again immediately. Open lots of Chrome tabs, launch Task Manager, and watch as memory consumption falls below the threshold, starts rising within a few seconds, hits the threshold again, falls... And repeats until you get bored.

The end result is you might be holding RAM use down, but you're generating extra CPU work and maybe disk I/O as memory is paged in and out again.

This doesn't necessarily make the program useless, but you will need to tweak your browser's maximum memory usage before you start. Set Chrome's maximum RAM to 300MB or more, for instance, and All Browsers Memory Zip will kick in much less often, reducing its own resource use.

All Browsers Memory Zip's aggressive default settings mean it's more likely to slow your PC down than speed it up. This problem can be minimized by adjusting the "max memory usage" setting for each of your browsers, but don't expect too much. For memory optimizer fans only.