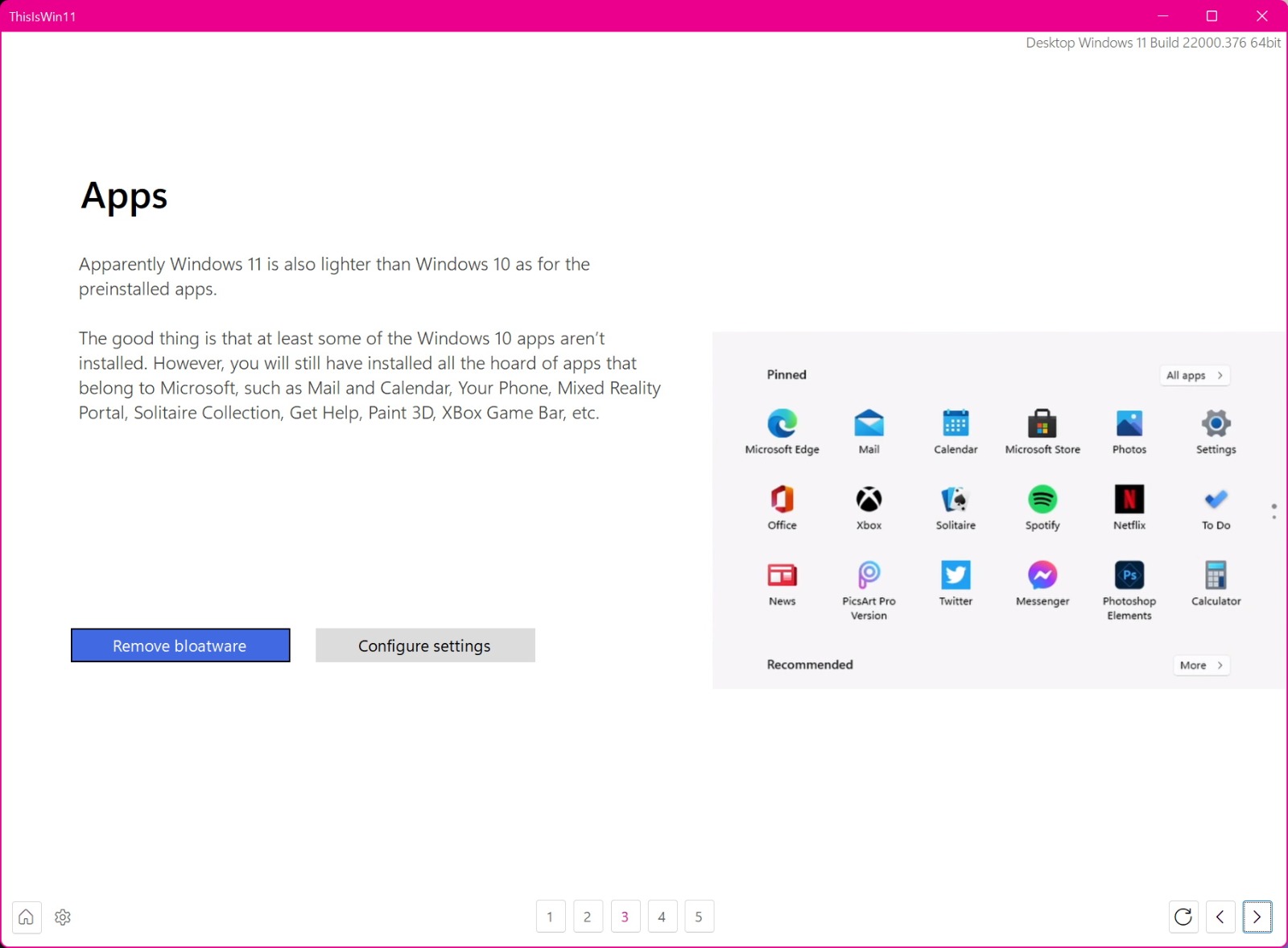 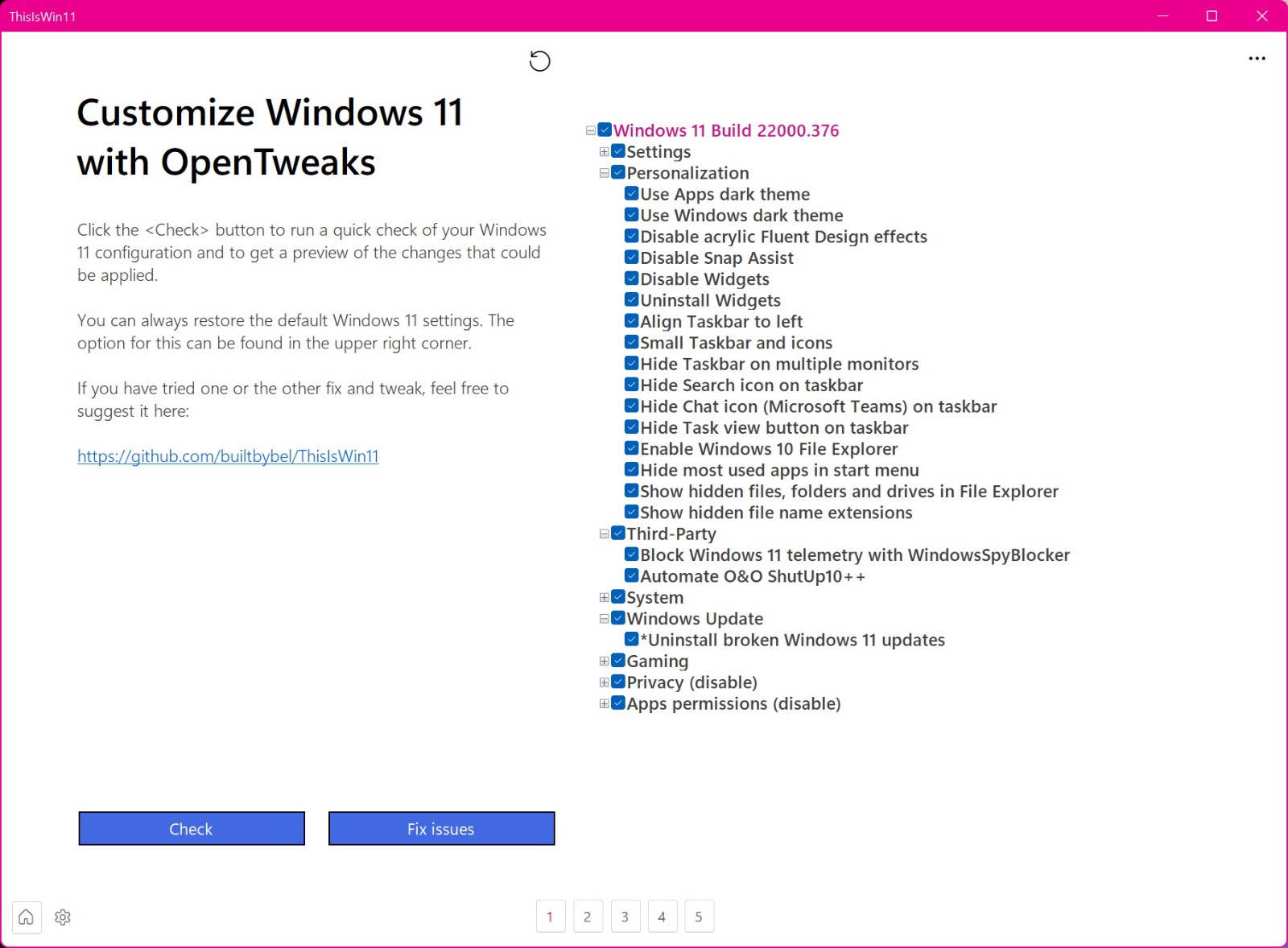 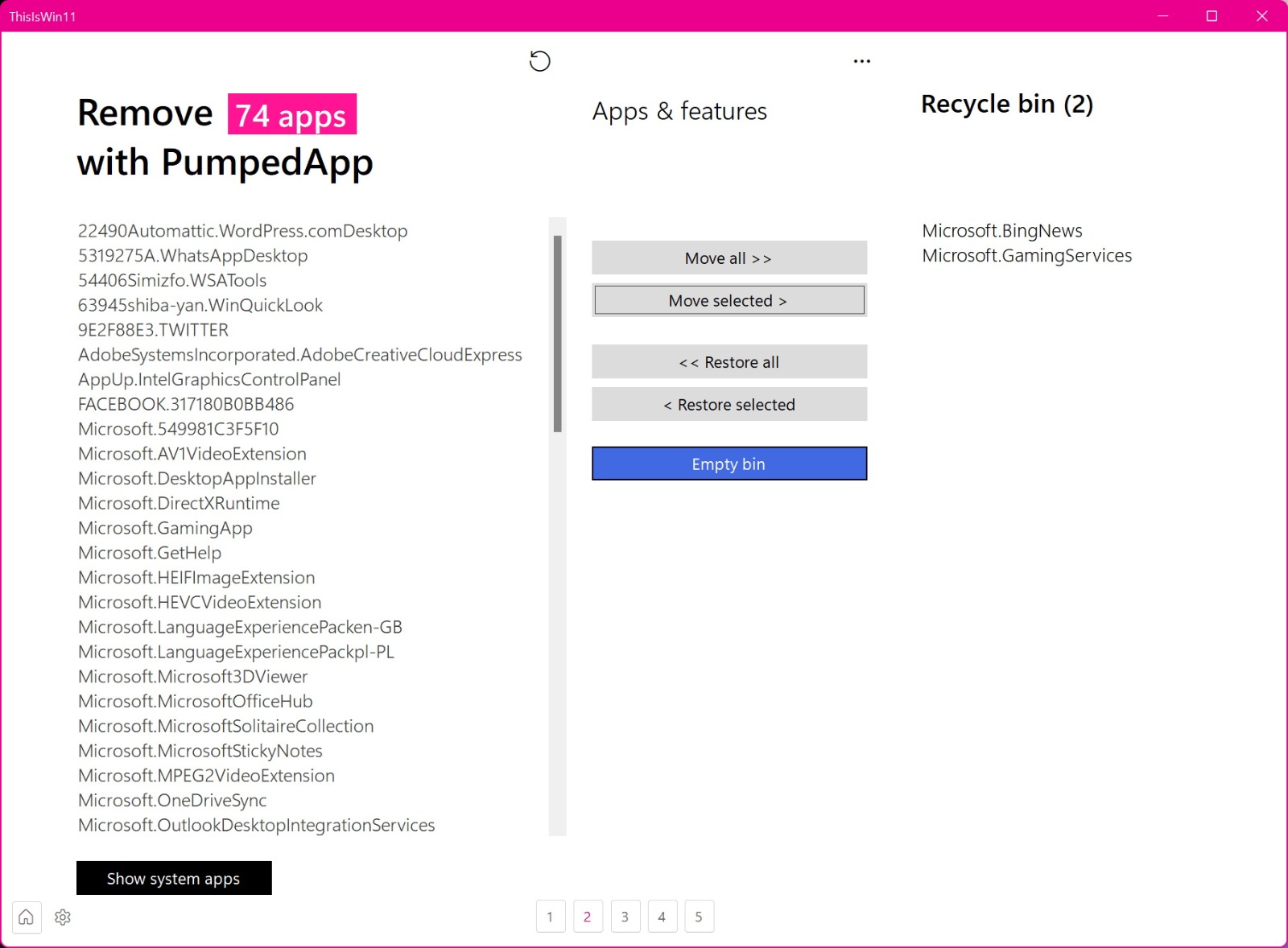 Tweaking tools have always been popular, and with the launch of Windows 11 there is a whole new market for such utilities. One of the first to be release – even before Windows 11 itself – it ThisIsWin11. It is billed as "the real PowerToys for Windows 11" and includes a number of options for personalizing, tweaking and debloating the operating system.

The app is divided into a number of sections, starting off with a helpful introduction to what you can find in Windows 11 before getting down to the nitty gritty in the System section. Here you can start tweaking Windows 11 to your liking, using numerous settings to change the appearance and functionality of the operating system.

It is possible to boost privacy by disabling various telemetry-related components of Windows, as well as preventing Windows from making constant suggestions to you. Some of the options, such as setting to show file extensions and hiding the Microsoft Teams icon from the Taskbar, are things that you can achieve in Windows by yourself, but it is very handy to have a whole bunch of settings like this available in one place to save you from having to hunt around too much.

While tweaking and personalization is a large component of ThisIsWin11, debloating is another important element. The tool makes it possible to remove unwanted features and apps from Windows 11 such as the Camera and Alarm apps, and other preinstalled bloat that you can live without.

You can also use ThisIsWin11 to create your own custom install packages – something that proved very handy when reinstalling. You can select a series of apps – such as Firefox, Chrome, Audcity and numerous other popular titles – and have the tool create a package installer that when run will download and install all of your chosen software in one fell swoop.

The final section of ThisIsWin11, "Automate tasks", serves as a shortcuts to putting in place numerous common tweaks. This includes implementing a strong set of privacy settings, freeing up disk space, updating Store apps and boosting performance in jus ta couple of clicks. Being based on scripts means that this list is going to grow and become even more useful.

Over the coming weeks and months we can expect to see a rash of Windows 11 tweaking tools floating the market, but ThisIsWin11 manages to be one of the first. Despite carving itself a groove as the pace-setter, the utility gets off to a great starting giving Windows 11 users plenty of options that are otherwise difficult to implement. The developer promises that the software will evolve as new builds of Windows 11 are released, so this is definitely an app to keep an eye on.

- Sign of Life! The project is alive 🚀 Had a busy schedule the past couple of months.....I'm slowly waking up again
- Titlebar matches Windows now and has Mica behind it #175
- ThisIsWin11 and LoveWindowsAgain App have now been merged into one package.
- The latter application builds on the code of the former and partly vice versa. If you want to do it fast I recommend the LoveWindowsAgain App, for in-depth customizations you can use the ThisIsWin11 monster
- Fix some links
- Minor fixes

Stop Windows 11 from spying on you with this privacy tool

Upgrade to Windows 10 Professional for $39.99 and use Group Policy Editor to tweak and secure your computer