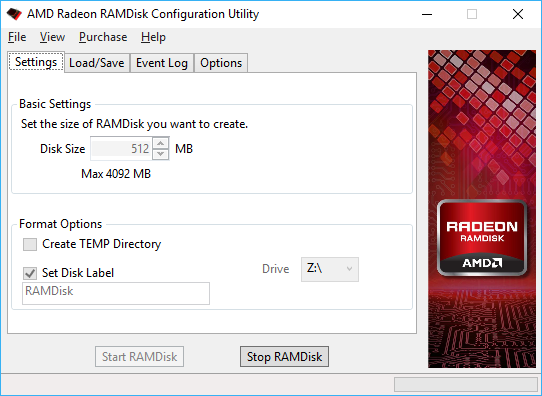 AMD Radeon RAMDisk is a free tool which creates a virtual drive using up to 4GB of your system memory.

The RAMDisk outperforms any other storage media by a huge margin - maybe 100x faster than an SSD - which gives you all kinds of speedup possibilities. You could run commonly-used portable programs from there, maybe use it to store a video file you're playing so it won't slow other PC activities, perhaps save your browser cache on the drive for superfast read/ write speeds.

Setup can be as easy as choosing the size of the RAMDisk you'd like to create, and giving it a drive letter. (Don't allocate too much RAM to your new drive, otherwise Windows and application performance will suffer and your system might be slower overall.)

There are other options to explore, in particular the ability to save the RAMDisk to your hard drive when the PC shuts down, and load it again on boot. That's useful if you need a persistent drive, for example to install an application, but it may add a noticeable delay to your startup and shutdown process.

Automatic NTFS formating
Automatic assignment of Drive letter
Several minor fixes implemented
Added support for 12GB and 24GB licenses
Updated user's manual
Features removed:
1. User will not be able to use FAT16 or FAT32 or unformatted drive as a format option for RAMDISK, through the GUI. NTFS will be default format option through the GUI.
2. User will not have the ability to create a RAMDisk without specifying an image path on harddisk.
3. Save of image file on non-system drives has been made optional.
4. Space reserved for OS increased to 1GB from 600MB.

AMD Radeon RAMDisk is a capable RAM disk creator which can make a real difference to your PC's performance, assuming you've plenty of spare memory. It's just a rebranded version of Dataram RAMDisk, but the free-for-personal-use build has a higher maximum size (4GB vs 1GB) which could justify the download.

Take care of your hard drive with this handy utility

Maintain your Mac's hard drive with this powerful disk utility

Optimise and maintain your SSD drive for the best possible performance

Get your life in order with this customisable scheduler