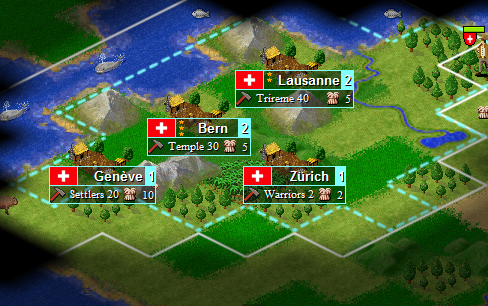 Freeciv is an addictive, turn-based strategy game, based on the classic Sid Meier's Civilization series.

The story starts in 4000 BC, where you're the leader of a small, weak and extremely vulnerable tribe. It's an uncomfortable position, but if you're careful, and make the most of natural resources, then things will soon begin to change. You'll develop new technologies and weapons, build new cities, expand your empire and become more powerful.

And this is just as well, really, because you're not alone. There are other civilizations in the game world, too, and as your borders expand then you'll soon encounter them. You can trade with them, learn new skills, and become friends - or you can send your armies to raze their cities to the ground. Decisions, decisions...

The objective of the game is to be the last civilization standing, or to be the first to colonise space, or to be the most powerful civilization at a given deadline. That, and many of the other game rules are up to you, which is part of the appeal of Freeciv: it can feel like many different games, depending on how you set it up.

And in the unlikely event that you get tired of the basic game, there are plenty more options on offer. You can play pre-programmed scenario games, based on real maps (North America, Italy, Japan, more); use the map editor to create new layouts of your own; customise the game with new rules, graphics or sounds; or, of course, pit your skills against other Freeciv fans with the multi-player version of the game.

A classic game format, well implemented. If you like turn-based strategy then you must give this a try