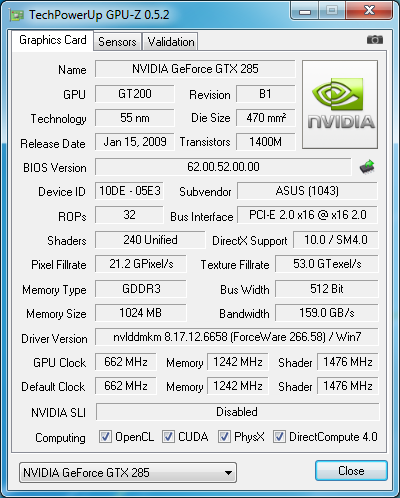 GPU-Z is an interesting system information tool that tells you everything you'll need to know about your graphics card and GPU. (Despite the name and appearance, it has no connection to the CPU-Z program.) And we do mean everything.

So you don't just get the basic details, like your graphics adapter model, memory driver and clock speeds. The program will also report on the GPU revision, die size and number of transistors. It'll tell you the DirectX version supported by the card, mention the type of RAM it uses, provide performance details like the pixel and texture fill rate, and highlight the driver version you're using, for example. (If you want to keep this information for reference later, the camera icon top-right will save a screenshot.)

GPU-Z also includes a handy monitoring section, that tracks details like your core, memory and shader clock speeds, GPU and PCB temperatures, fan speeds, memory use, GPU load, memory controller load and more, which could be very useful if you've overclocked your card and want to confirm that it's still stable.

And while the straightforward interface doesn't exactly look weighed down with options, the program is actually quite configurable. Check the arrow to the right of each attribute and you can tell GPU-Z to monitor it (or not), and whether you'd like to see the current, lowest, highest or average reading. And if you check "Log to file" then your temperatures, fan speeds and so on will be recorded for posterity, allowing you to exercise your card by running some graphically intensive process, and then find out exactly how your system copes under pressure.

This portable and easy-to-use monitoring tool can help you with many graphics problems, from discovering which BIOS version you have to checking for an overheating GPU