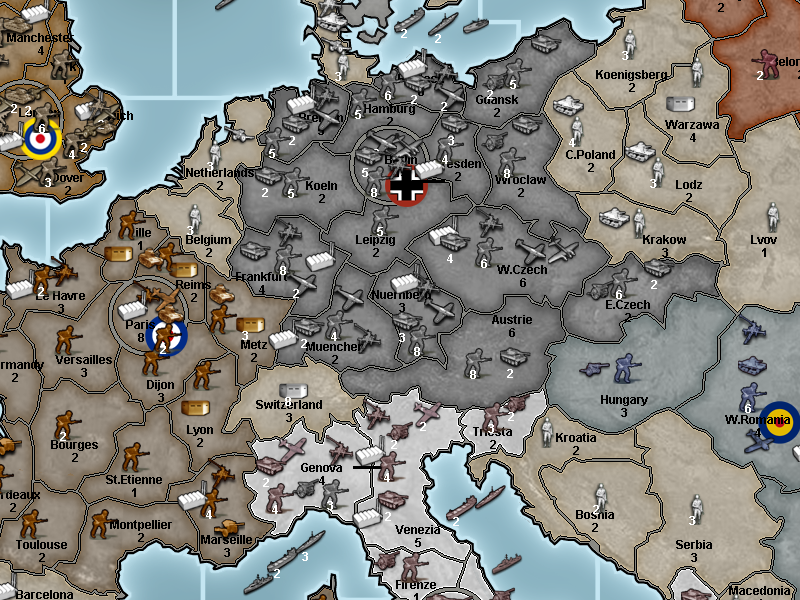 TripleA is a free, turn-based strategy war game, based on the board game Axis & Allies and with some similarities to Risk.

By default the program will open on its "Big World" map, which places you in middle of World War II, circa 1942. There are six players (Russians, Germans, British, Chinese, Japanese, Americans), each can be played by humans or the computer (with several AI levels), and once you've get this up you'll see tanks, planes, subs and more move across the map, engaging in battles for territory and strategic superiority.

This process isn't as realistic as in some other games, admittedly. You don't get neat animations of flying planes, sinking battleships, or anything else. In fact the main screen looks like something a 13-year old might have drawn for a school project. The rather basic graphics do have a charm of their own, though, and as you get drawn into the gameplay you soon get past them and begin to enjoy TripleA for itself.

And despite its different looks, TripleA's gameplay is much the same as most strategy games: you collect resources, using these to purchase new units or technology, then move your units to attack others. This process isn't as intuitive as in other games, so expect an initial learning curve, but once you understand what's going on then there's plenty of fun to be had here.

Not least because, even if you do master the Big World game, there are many other options to try: 3 other built-in maps; more than 100 others to download and try; you can fight others via network, online, and "play by email" options; there are all kinds of configuration options to customise how the game works; and as it only needs Java 6, you can run it anywhere - just unzip the download and go.

Game no longer shuts down when host disconnects, allows game to be saved.
All rocket targets are now selected before dice are rolled.
Removed non-default ‘brute force’ casualty selection option

The graphics are basic and there's a lot to learn, but TripleA's gameplay also has real depth, and if you're happy to spend time figuring out how everything works then there's plenty of fun to be had here