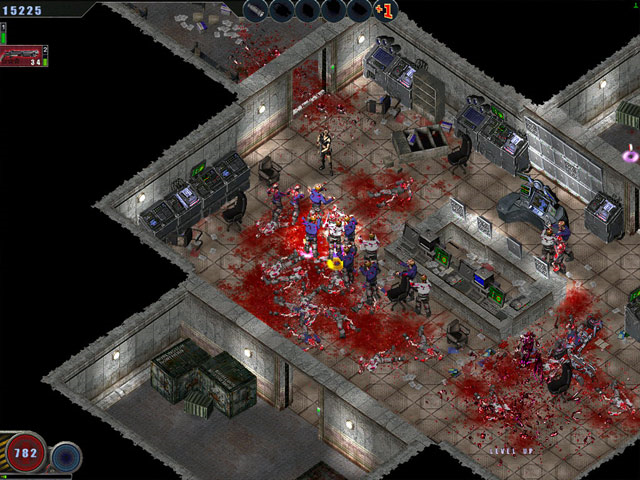 If all those hours spent watching "The Walking Dead" has given you a taste for slaughtering the undead then you just might appreciate Zombie Shooter, a simple isometric shooter which provides a great deal of blood-soaked fun.

The plot (such as it is) sees you wandering around a secret research base, trying to figure out what's going on, but don't expect much in the way of complexity or depth. There are no difficult puzzles here: you're just running around a maze, slaughtering zombies and other creatures, while picking up weapons, ammo and health packs, until you find your way to the next level.

And while the graphics here are a little basic, it's this overall simplicity that is Zombie Shooter's appeal. You don't have to pay attention to some lengthy back story, or master a lengthy list of commands and options; in fact, we got started without reading any instructions at all. Everything works much as it does in many similar arcade-style games, so you'll point your gun with the mouse, move using the arrow keys, left-click to fire and press 1, 2, 3 and so on to select your weapons. That alone is enough to get you a very long way, and if you do make a mistake and die then you can respawn in a keypress to try again.

If you prefer your games to have, well, a little more thought, then obviously this rather basic approach will be limiting. We're big fans of zombie-slaughtering, for instance, but even we began to get a little bored in some sections of the game, where essentially all you have to do is hold down the left mouse button and wait until you've destroyed everything in sight.

Still, there are more challenging sections. Being approached by two crowds of zombies, for instance, from different directions, can present you with a dilemma. Particularly if you've only got the slow-loading shotgun to hand.

And so, if you're looking for some quick and simple arcade action, Zombie Shooter may well appeal. You can jump in and out of the game quickly, it's all very easy to learn, and while the graphics are basic this does mean it should deliver good performance on just about any hardware (the program runs on anything from Windows 95 upwards).

The graphics are rather basic, but Zombie Shooter is still fun to play (in small doses, at least) and it should run happily on just about any hardware