An open-source Risk-like board game 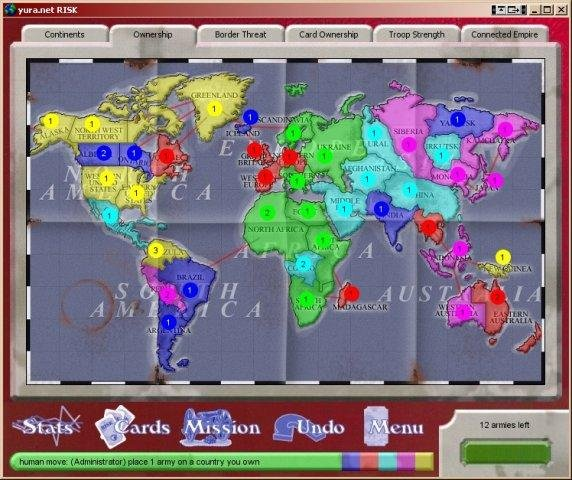 Domination is an open-source Risk-like board game, where you use all your military strategy skills to sweep across continents and capture the world.

You get various maps to choose from: UK, America, Europe, the classic Risk design, the Roman Empire, Lord of the Rings, and a variety of global designs. There are lots more available online, and you can even use a map editor to design your own.

You and your competing players (human or AI, local, network or across the web) then take it in turns to place armies in unoccupied countries.

After that, every player in turn gets a chance to attack their neighbours, maybe earning valuable cards (which you can trade in later for more units), placing new armies and reinforcing their positions, until one player remains.

That's just the core idea, of course, and there are plenty of twists and complications to keep things interesting, most of which are explained in a bundled manual.

The documentation could be better, and if you've not played anything Risk-like before, it might take a while to figure out what's going on. But once you've mastered the basics, Domination proves a fun game which should keep you entertained for hours.